The Hotel Excelsior Palace boasts a spectacular setting. The property is perched on a promontory, which juts out over the western coastline of Sicily, allowing guests to enjoy unbeatable views of the Ionian Sea and Mount Etna in the distance.

The hotel gives you a real taste of historic Sicily. It was one of the first properties to spring up in Taormina when it was built back in 1904, and is even bordered by the remnants of a Greco-Roman wall. Landscaped gardens encircle the hotel building, giving the whole place a tranquil feel. Orange, almond and carob trees line the terraced walkways which lead down to the pool, while tall pines offer plenty of shady spots. The pool itself sits at the bottom of 92 steps, (there is no lift) and comes with panoramic sea views.

Sicilian specialties made from locally sourced ingredients dominate the menu at the Excelsior Palace’s restaurant. The wine list features plenty of Sicilian bottles, including ones from the vineyards surrounding Mount Etna. After dinner, you can treat yourself to a delicious homemade dessert.

There’s a cosy lounge area decked out with traditional Italian fittings. It’s the perfect spot to enjoy a quiet drink or relax with a good book.

There’s a shuttle service to and from the main beaches in the area, (coast of Taormina, Spisone, Mazzaro’, Isolabella and Letojanni, Mazzeo) if you don’t fancy the walk. Hotel guests can also take advantage of special rates for the private bathing areas on these beaches.

The hotel offers special local parking rates, as well as a car valet service.
About the location
Holidays in Taormina marry history and culture to form an unforgettable experience in Italy. It’s perched at the top of Monte Tauro in the foothills of Mount Etna on Sicily’s Eastern coastline, between the cities of Catania and Messina. This ancient town offers visitors a view into the past with a number of elegantly preserved historic treasures, from the grand Greek-Roman Theatre to the equally impressive Palazzo Corvaja, which are just waiting to be discovered.

You don’t have to be a history buff to make the most of everything Taormina has to offer. Alongside the historical sights there are plenty of other attractions to take in. The main street, Corso Umberto, is traffic free and home to an array of shops and restaurants to rival any in the bigger cities.

There are also plenty of seaside activities to dive into thanks to the town’s coastal setting. Adventurous travellers can try watersports like wind surfing and snorkelling, while relaxing scenic boat tours around the gorgeous capes and grottos of the Ionian Sea allow you to explore at your own pace. Alternatively, simply spend long tranquil days on sun soaked shingle beaches.
Transfer time
The hotel is 1 hour from Catania airport. Return private transfers included. To change your transfers or book car hire instead, simply call us once you’ve completed your booking. 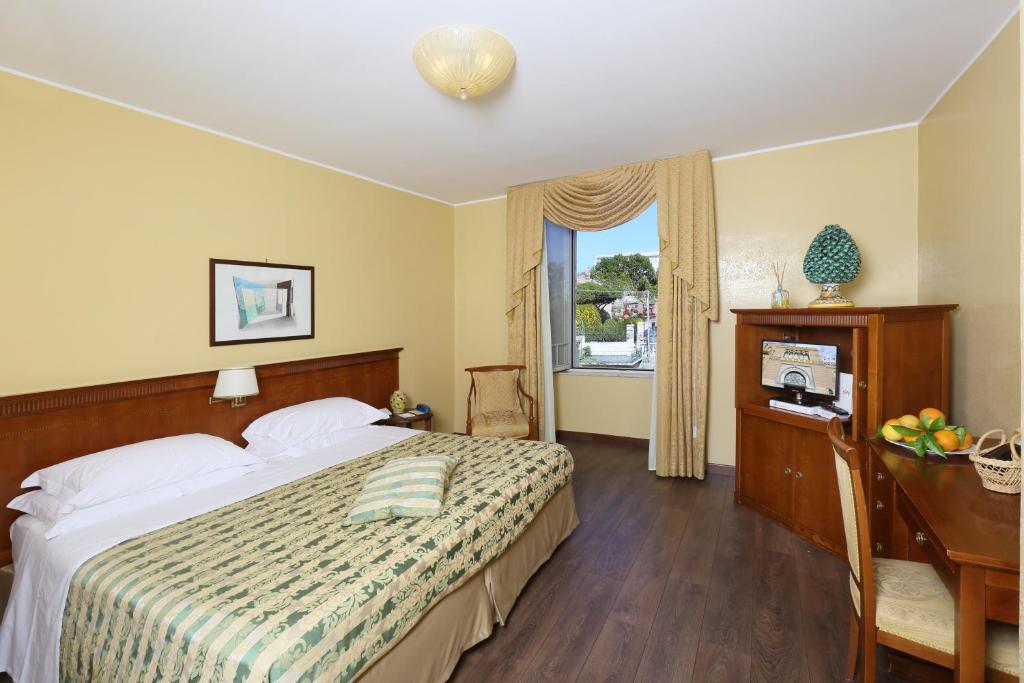 These classic rooms feature comfortable twin beds or double and elegant dark wood furniture. There’s air conditioning between June and September, plus a safe, TV and minibar. En suite bathrooms come with a bath or a shower. 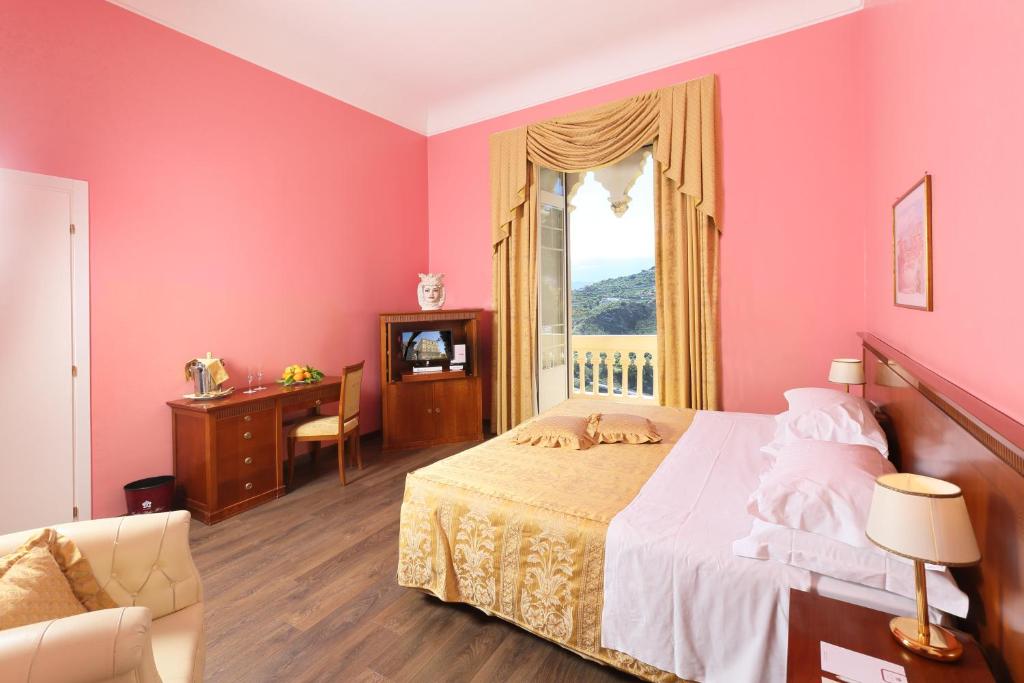 These double or twin rooms come with traditional wooden furniture and floor to ceiling windows which showcase views of Mount Etna or the Greek Theatre. Air conditioning is available between June and September, and there is a safe, TV and minibar. En suite bathrooms feature a bath or shower. 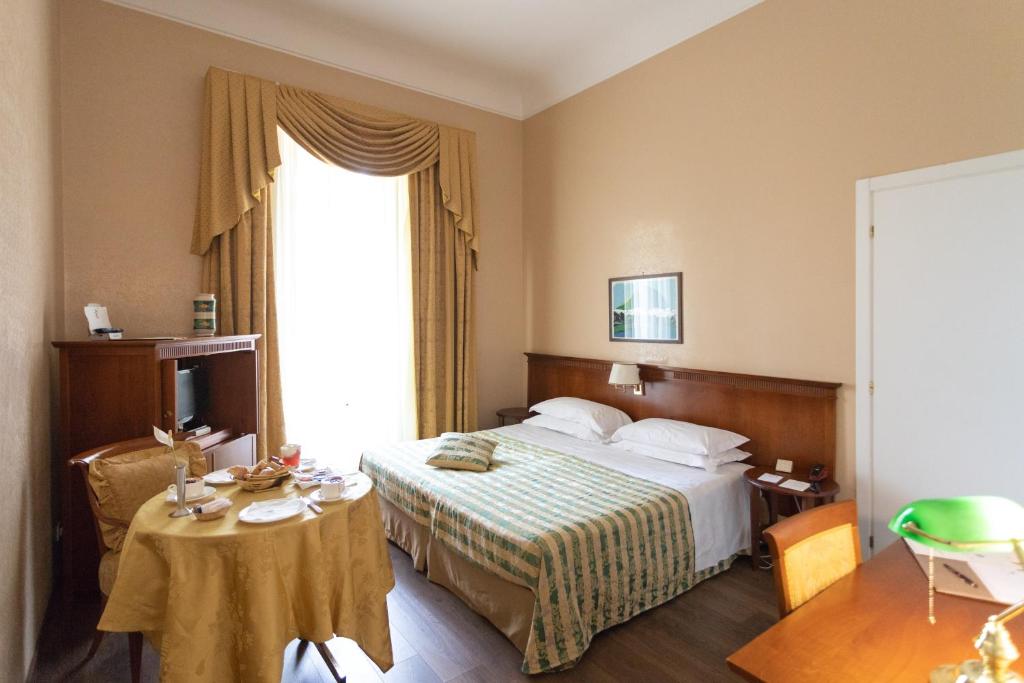 Double room with a French balcony and stunning view of the Etna volcano, and laterally onto the Bay of Taormina. 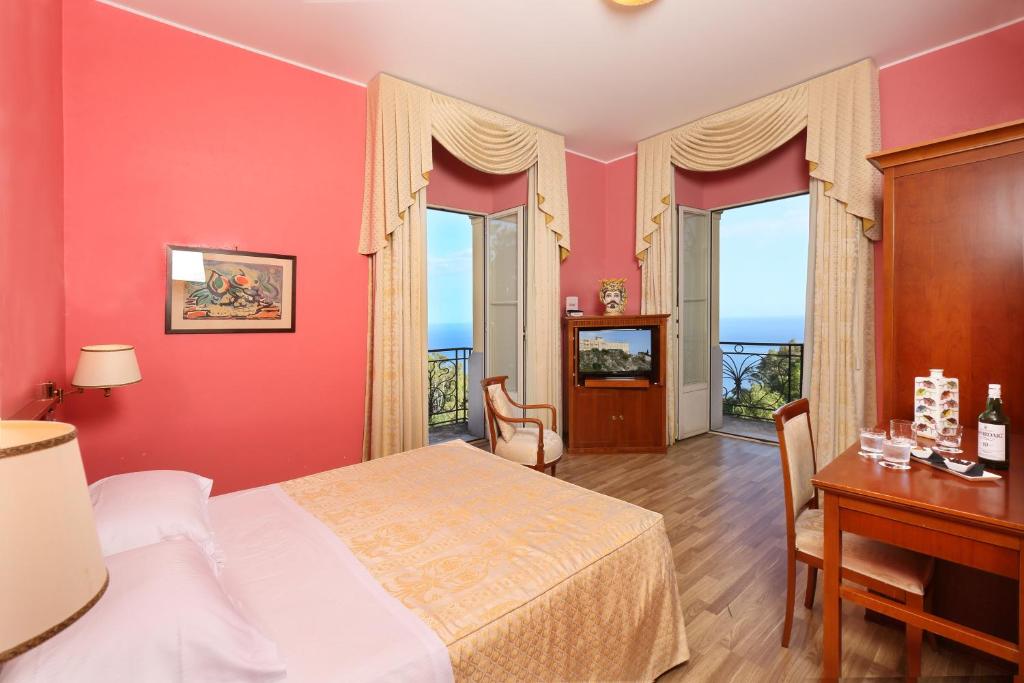 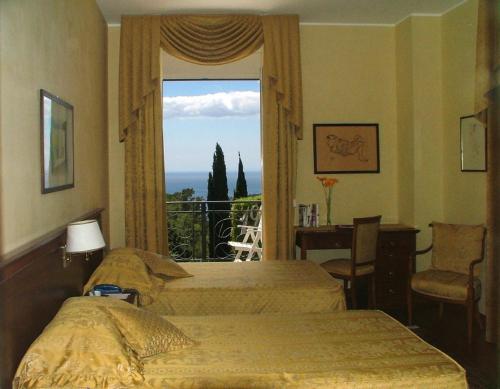 Perfect if you’re travelling on your own, these rooms come with a single bed, classic dark wood furniture, and air conditioning between June and September. There’s a safe, TV and minibar, plus an en suite with a bath or a shower.

Facilities
Air conditioning
Free WiFi
TV
Telephone
Hairdryer
Minibar
Safe
This room is not available to book online.
But give us a call and one of our travel centre experts may be able to get a quote for you. Call to book 01293 762410 *

Based on 931 traveller reviews

29
What to expect
Location