A refined oasis of tranquillity the Adults only five star Praia Art Resort, part of the Small Luxury Hotels of the World, is one of the jewels of the spectacular Ionian coast of Calabria, Italy’s best kept secret for some time but increasingly on the radar of discerning travellers seeking out the road to less travelled parts of Italy.

Located in Isola di Capo Rizzuto in Calabria, beside the protected Marine Reserve, the resort makes a striking first impression with the tasteful, if somewhat quirky,  décor - a combination of authentic Mediterranean design and modern luxury touches, its rooms and suites sit perfectly in their natural surroundings. Visit the private beach, take in the breathtaking views of the Ionian Sea and savour mouth-watering local flavours at the 1 Michelin Star Restaurant. Further afield there is an abundance of things to do in Calabria, including visiting the National Archaeological Museum and Aspromonte National Park.


An elegant outdoor café to laze during your breaks and sip your favourite cocktail while the sea breeze brushes your skin.


A Michelin-starred restaurant which offers Mediterranean cuisine. Open daily for dinner only, the menu is based on fresh fish and typical Calabrian dishes. It caters as well for special dietary requirements.


A thick pine forest that affords glimpses of the bright blue sea surrounds the resort’s private beach. Equipped with 30 umbrellas and sunbeds as well as 3 unique hammocks in the water. An upper deck with sofas provide the perfect ambience to look out to sea and take in the gorgeous sunsets.


The private swimming pool is perfect for your morning workout and for having fun or relax. At the luxurious solarium, you can savour a detox drink or a fresh cocktail before dinner.


Guests love to discover the secrets of cooking with one of the best Italian chefs. Praia Art Resort offers them the opportunity to learn how to prepare delicious dishes under the guidance of the award-winning chef. Pay locally.

About the location
Located just 20m from the beach, close to the mountains and on the edge of the Marine Reserve of Capo Rizzuto.
Transfer Time
The hotel is 1 hour from Lamezia Terme Airport. Return private transfers included. To change your transfers or book car hire instead, simply call us once you’ve completed your booking.

The Patio is the basic room type and is located on the ground or first floor, with outdoor patio or terrace and deck chairs. Ideal for those who like to spend their vacation in simple but relaxed setting. 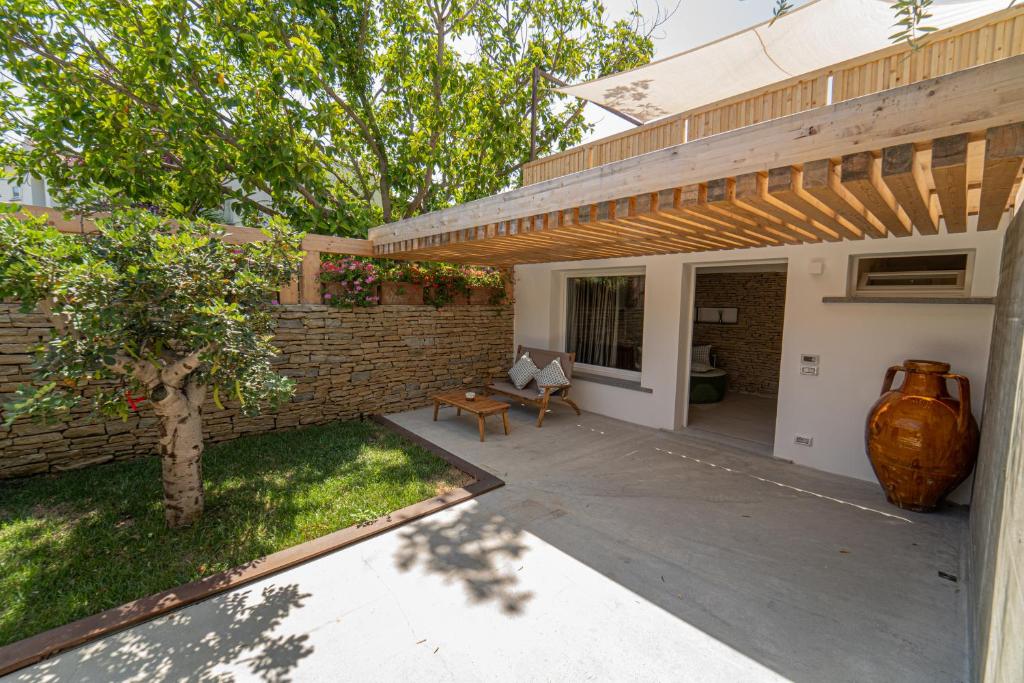 Superior rooms of 25 square meters with 1 bathroom and a small living room, located on the ground floor in the internal area of the resort for greater privacy. They all have an outdoor patio area with a table, chairs and sunbeds for perfect relax.

Spacious rooms located either on the ground floor or first floor by the pool area or inner courtyard. They feature either a private patio or a terrace with a bathtub, table and chairs.
Each room has been individually designed and the interior themes evoke the colours of the local landscape. Fine furniture and materials as well as a queen-sized bed provide the perfect space to relax and unwind.

On the first floor and ideal for those who like to spend a lot of time outdoors, this room type features a balcony and a large terrace with an outdoor bathtub, a sun lounger and two deck chairs to offer guests comfort and relaxation.

Located on the first floor the Suite Elegance provides a romantic and relaxing atmosphere and boast a magnificent Jacuzzi whirlpool tub.

Located on the first floor the Suite Superior La Romantica is the choice for the most discerning customers. Newly built, its interior is simple and elegantly embellished with with natural elements and design touches. The Suite comprises of two bedrooms and two large outdoor terraces.

Based on 217 traveller reviews

8
What to expect
Sleep Quality