The property has been a hotel since the 19th century, but its rich history goes back even further, to when it was a monastery in the 17th century.

The hotel sits in the city’s main piazza (square) in the historical centre of Città di Castello, and is close to the city’s leading cultural attractions.

Hotel Tiferno celebrates the esteemed Italian abstract painter and sculptor Alberto Burri, who was born in Città di Castello, and you can observe many of his works adorning the hotel walls.

The en suite rooms at Hotel Tiferno boast all your home comforts, including air conditioning, a flat screen TV, hairdryer, minibar, telephone, a safe, and complimentary WIFI. Bathroom toiletries are also provided for your convenience.

Tuck into delicious traditional Umbrian recipes, that have been reimagined at the hotel’s restaurant, Le Logge, or head to the hotel bar, Il Caminetto, for an evening cocktail or nightcap.

There’s a Tecnogym fitness centre if you wish to work out, as well as a spa where you can indulge in a relaxing massage during your cultural holiday in Città di Castello.

Hire bikes from the hotel and ride along the city’s ancient streets, or hike along the Camino di San Francesco (The Path of St Francis) and breathe in the beautiful landscapes of northern Umbria and Tuscany.
Facilities

Serving a variety of drinks and aperitifs. Perfect for enjoying an aperitivo after a long day exploring Umbria.


The Spa includes a sauna, turkish bath, emotional showers, relaxation area, or a massage session which is available upon request and payable locally.

Hire a bike and explore the old town of Citta di Castello.

Città di Castello is an enchanting city located in northern Umbria, bordering the beautiful region of Tuscany. The bustling streets of Città di Castello are lined with grand palaces from a bygone era and are encircled in city walls that date back to the Renaissance.

Sitting in the heart of the historic centre of Città di Castello lies Hotel Tiferno, a four star boutique hotel housed in a former 17th century monastery. Hotel Tiferno is very much part of the city’s heritage, as it’s been a reputed hotel in the city since 1895.

Città di Castello was the birthplace of the 20th century Italian abstract artist Alberto Burri. You can visit many cultural attractions in Città di Castello, including the Alberto Burri Museum at the Palazzo Albizzini, which boasts forty years of the artist’s paintings and sculptures.

In the environs of Città di Castello you will discover beautiful Umbrian landscapes of arable farmland, and the rolling hills of the Upper Tiber Valley, which are worthy of being immortalized in their own scenic paintings.

You can also visit the Ex Seccatoi del Tabacco, another gallery that pays homage to Alberto Burri located within an old tobacco drying factory. Brimming with many historic and artistic treasures from the Umbrian region, Hotel Tiferno invites you to be immersed in history during your cultural holiday in Città di Castello. 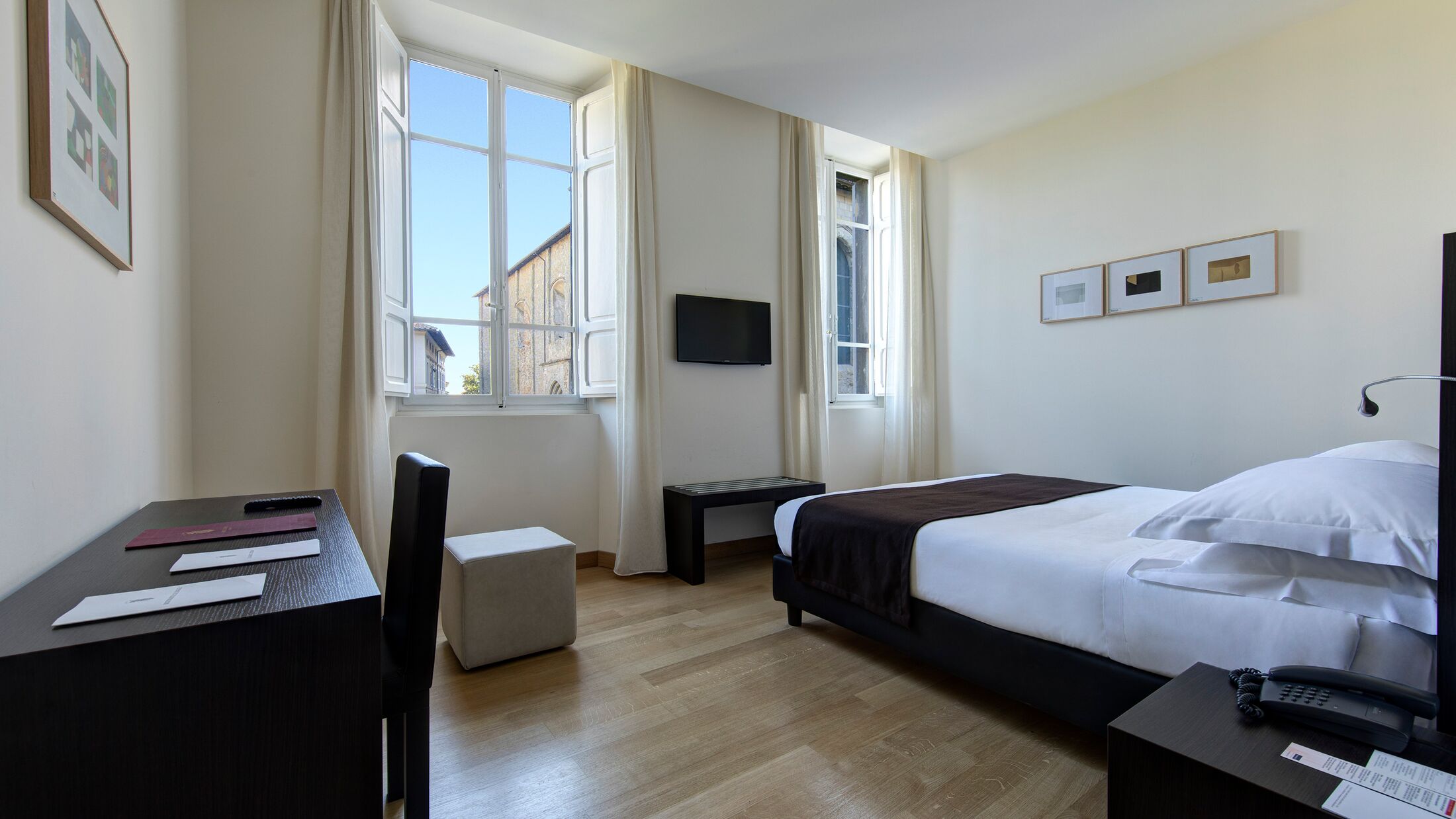 Superior rooms are decorated in a modern style with wood flooring. Offering ample space, perfect for relaxing after a day of exploring.

Based on 376 traveller reviews

5
What to expect
Location