A year of Italian events

Italians love a celebration and there are no shortages of feasts and events whether religious, historical or food related. Whenever I'm in Italy, I like to check the local tourist office to see what events might be going on during my stay - there is no better way than get a feel for the country, its people and culture than to join in and see what it's all about!

Here are some of my favourites throughout the year.

January - La Festa di San Silvestro - New Year's Eve
Join the crowds on New Year's Eve in Naples for the best street party in Italy and largest fireworks display you will ever witness! Start your evening in one of the many restaurants for a plate of lenticchie e cotecchino (stewed lentils and succulent pork sausage) - the traditional Italian New Year's dish - then head to the city's beautiful, ancient main square, Piazza Plebiscito, to witness the action. Throughout the city, live music events are organised as well as processions and of course fireworks which go off all through the night as the clock strikes midnight. When wandering through the quaint ancient streets of Naples on this night, mind your head! There is an Italian tradition to throw out anything old on New Year's Eve, so beware, as it is not uncommon to see plates and heavy objects flying from windows and balconies! 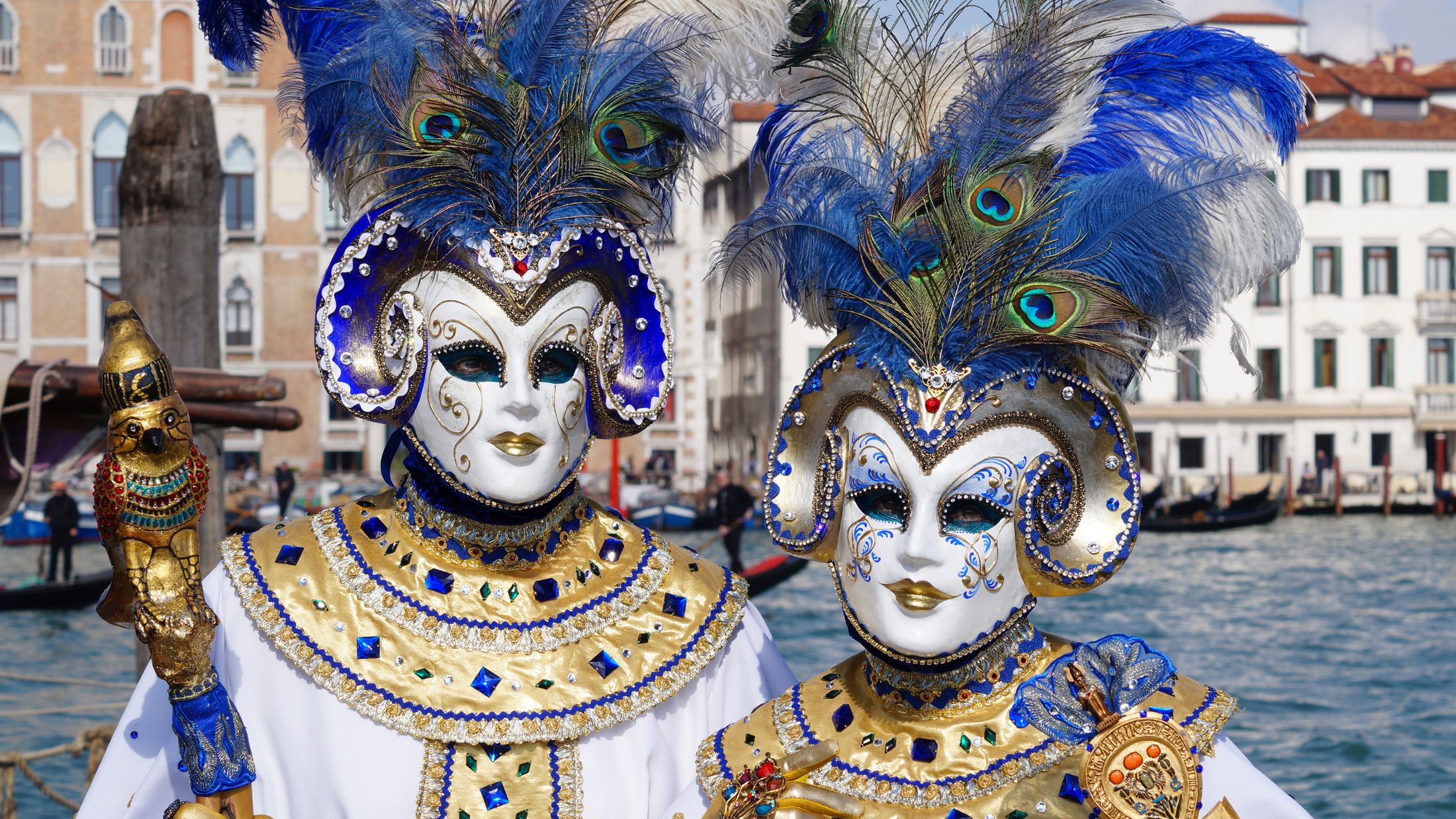 February - Carnival Time!
Carnevale is the week leading up to Ash Wednesday and is a really exciting time to be in Italy where every region, town and village celebrates with its own traditions, parties, carnivals and street food. Look out for sweet treats of chiacchere, fritelle, zeppole and other regional specialities. The world-famous carnival in Venice is a grand, elegant affair where people dress up in Cinderella-style period costumes with their faces beautifully masked. They can be seen from early evening strolling around St Mark's Square before heading off to dinner or a party. Venice is beautiful at any time of year, but during Carnevale the whole city becomes one big masked ball and is a truly spectacular scene. 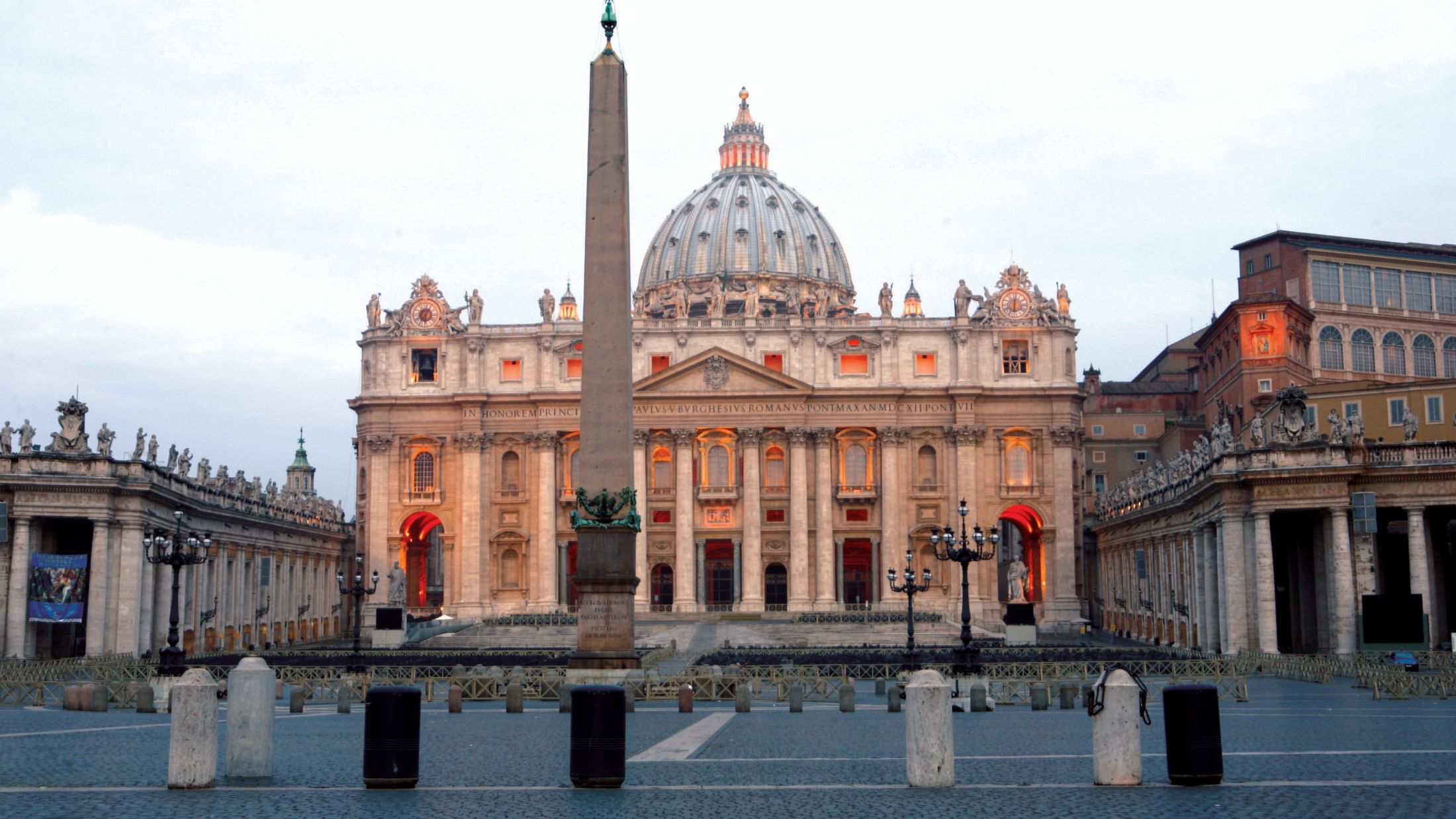 March/April - Easter in Rome
Easter is an ideal time to visit Italy and witness the many processions, rituals and traditions which take place during this weekend. In Rome, the evening procession is led by the Pope from the Colosseum along the streets, all beautifully lit up to re-enact and remember the passion of Christ. On Easter Sunday, the Pope gives his traditional papal blessing at St. Peter's Square in the Vatican at around midday. If you want to participate in the Easter Mass preceding the blessing, it is advisable to book in advance. On Easter Monday, known in Italy as Pasquetta, it is traditional for Italians to enjoy the outdoors with a picnic. So do as the Romans and head off to the Villa Borghese Park with some delicacies from one of the many salumerie (delis) in the city. April - Springtime Sagre - Ricotta Festival in Sicily
Sagre are food festivals and are celebrations of a certain food of a particular area. Spring festivals celebrate the likes of asparagus, artichokes, fennel, broad beans, peas and even ricotta. About an hour inland from Catania, you find the ancient town of Vizzini where an annual ricotta festival takes place usually on the last weekend of April. You will be able to taste freshly made ricotta from the best local producers as well as many other local delicacies and the delicious Sicilian ricotta-based desserts of cassata and cannoli. The festival has been going for over 40 years and has become Sicily's largest and most popular gastronomic event. 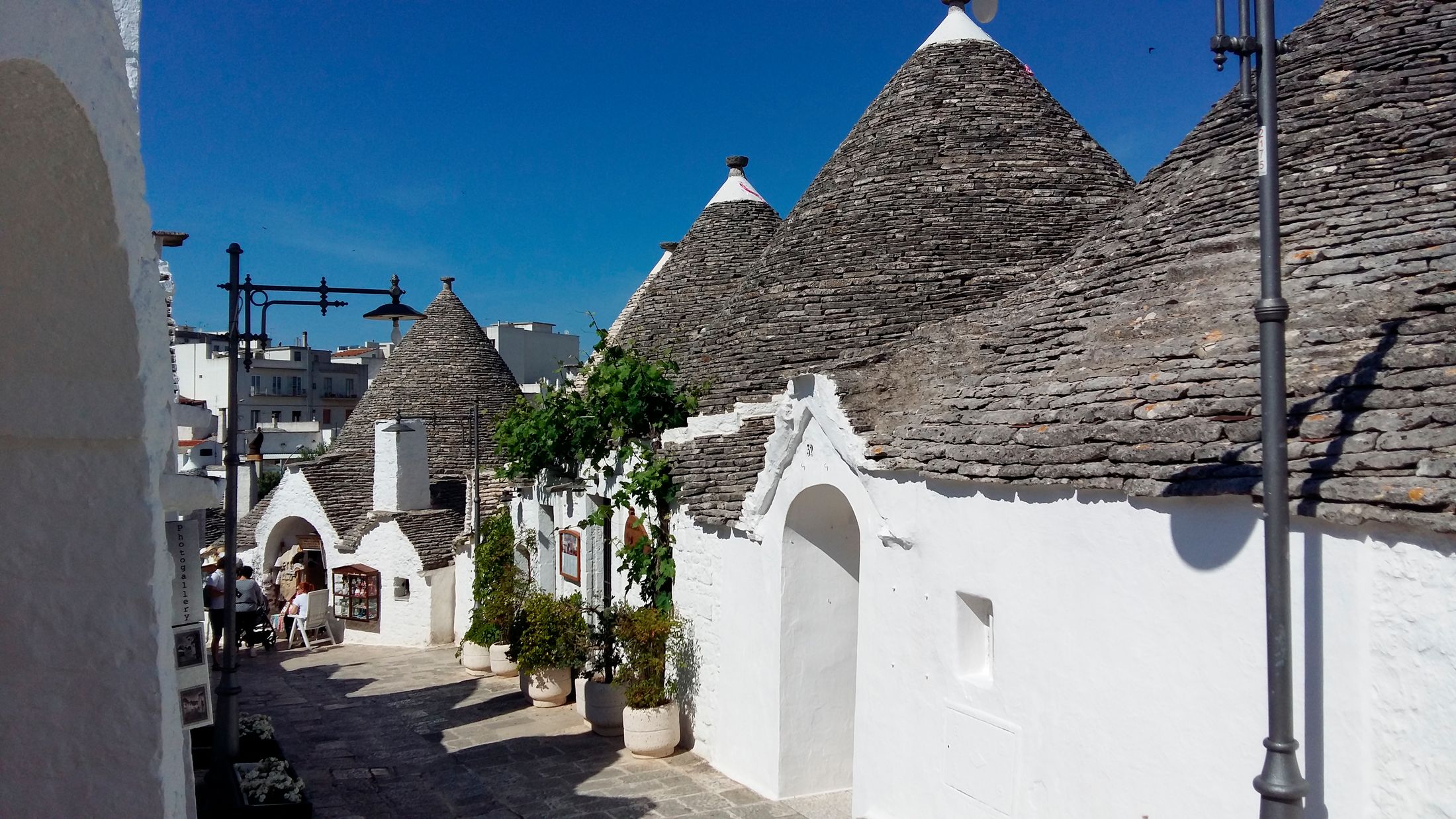 May - Festa di San Nicola, Bari
One of Italy's oldest events is the Feast of St Nicolas of Myra, patron Saint of the port town of Bari in Puglia. The celebration usually starts on 7th May and lasts a couple of days. A statue of Saint Nicholas is paraded throughout the town before being taken on a voyage by sea. A flotilla of brightly decorated boats accompanies the statue and at night crowds of people wait at the seafront for its return symbolising the time when the Saint's relics had been returned centuries ago. The town centre is festooned with brightly coloured ornate screens, people dress in period costume, floats are paraded and shows held. The events culminate with a Mass followed by a massive firework display. 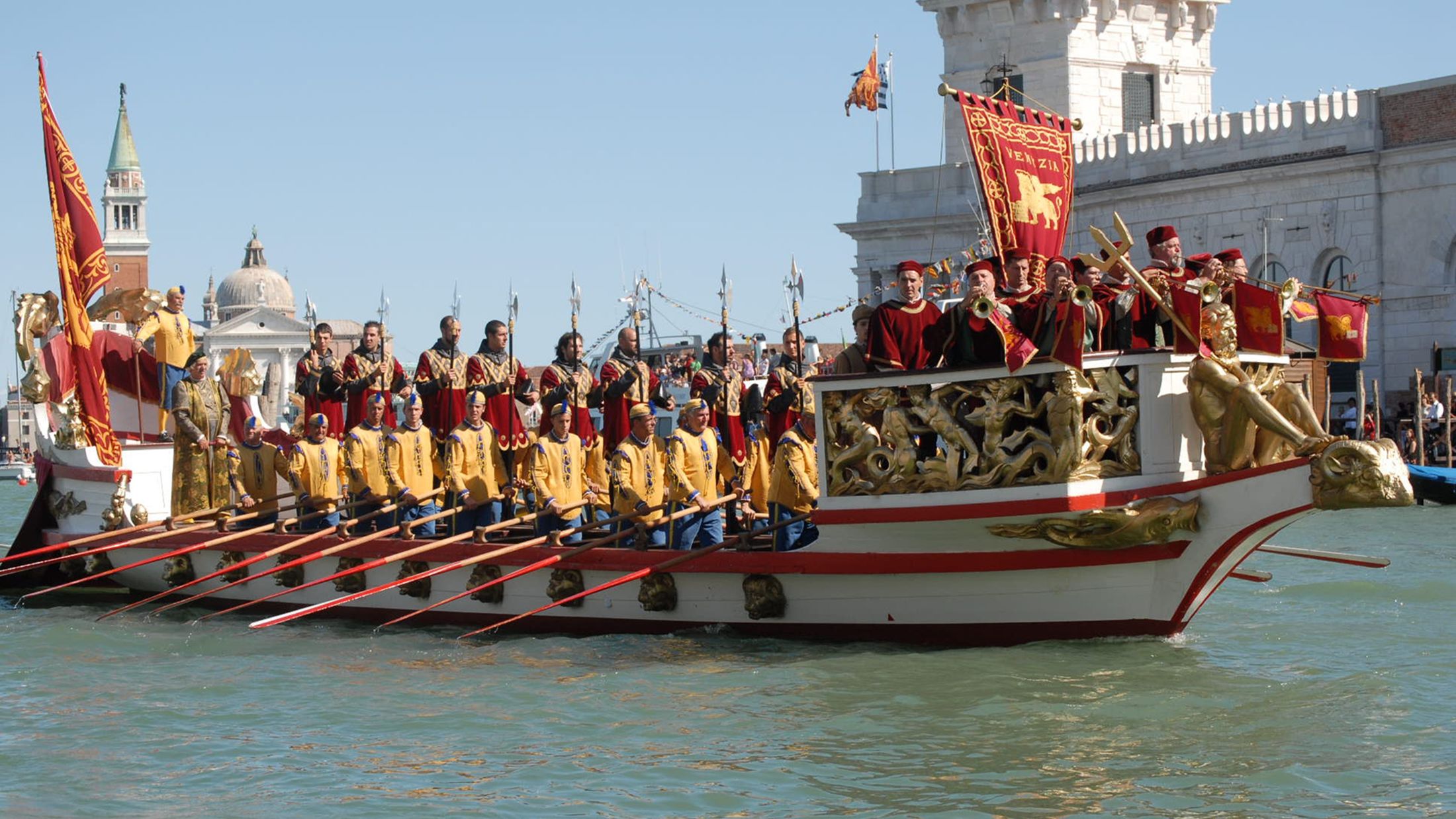 June - Regatta of the 4 Maritime Republics - Genoa, Venice, Pisa and Amalfi
The main four medieval maritime republics in Italy were: Genoa, Venice, Pisa and Amalfi - extremely powerful city-states who controlled the Italian seas. In the 1950's, it was decided to commemorate these former powers by holding an annual regatta against each other. Each year the 2km race is held in a different port and the four teams of eight race each other in slender gondola-type rowing boats known as gozzi. Each vessel is painted in the territory's colour and its animal symbol - Blue with a winged horse is Amalfi; Green with a winged lion is Venice; White with a dragon is Genova; Red with an eagle is Pisa. As part of the celebrations, processions are organised with people dressed in period costumes, horse parades, shows, dancing and the re-enactment of cultural and historical events of each republic's past is a highlight not to be missed. 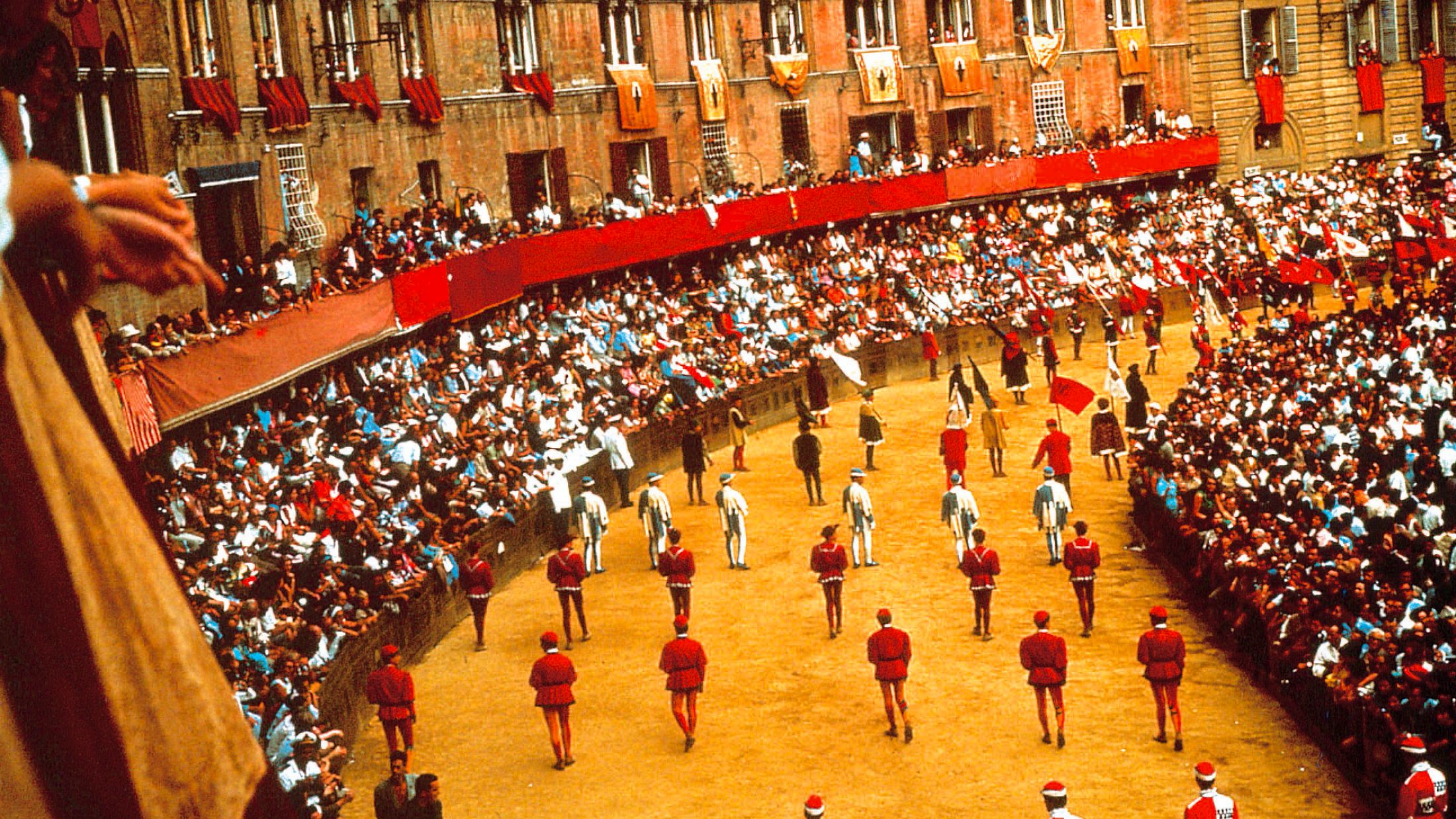 July - Palio di Siena
The Palio di Siena is taken very seriously by the people of the city and is a part of their lives since birth. Each person belongs to a contrada (districts of the town) and has a part in the organisation of this horse race event. The different contrade of the town compete against each other in a race which although lasts just over a minute the atmosphere is so intense. It has been known for a husband and wife from two different contrade to not see or speak to each other in the days leading up to the event! Each contrada has its own colours and emblem so it's a very colourful event with each jockey dressed in their team's colours and fans waving the same-coloured flags. I was lucky to have been there once and witness this spectacular event which is also marked with festivities, rituals and preparations that start days before and finish well into the night on the day of the race.

August - Open-Air Concerts
Where better to watch beautiful opera than in its country of origin? Perhaps the most famous venue is the Arena of Verona - a Roman amphitheatre, built in the 1st century. The opera season begins in June until the end of August where you can watch spectacular shows like Carmen, Aida or Turandot. Book early as this is very popular. There are many other open-air venues throughout Italy such as Torre del Lago, in Tuscany. This was Puccini's home for a time and now you can see some of his best and most loved operas. Tosca, one of my favourite operas.
September - Borgotaro Porcini Festival & Gusta Minori
During September you will find lots of wild mushroom feasts. Probably one the most famous is the Fiera del Fungo di Borgotaro in the Parma Appenines between the regions of Emilia-Romagna and Lunigiana in northern Tuscany. This festival has been going for many years to celebrate the highly prized porcino mushroom which is believed to be the best in these parts. There are competitions, live demonstrations, street food and entertainment. The food festival which I like to go to when I can is at home in Italy known as Gusta Minori. The community gets together putting on plays in period costumes to re-enact life in the past, music, poetry recitals and of course delicious local food of pasta, fish & shellfish and the famous sfusato lemons.
October - Chestnuts Feasts
October is the month where chestnuts feasts are held throughout rural areas in Italy. I love chestnuts so if I'm in Italy at this time of year I try to find out where the festivals are held. I remember being in Lunigiana, an area also known as northern Tuscany not far from Pisa, for the most amazing chestnut festival called La Castagna Racconta (the chestnut tells a story). The various stalls manned by sellers dressed in rural period costume offer a variety of dishes made with the humble nut, transforming it into dishes fit for a king - chestnut cakes, fritters, gnocchi, pasta and other regional specialities all washed down with local homemade wine. November - La Festa di San Martino & Festa del Cornuto
All over Italy, especially in rural areas, the Feast of San Martino, patron saint of wine producers, is celebrated on 11th November. On this day the vino novello (new wine) is opened and sampled. It is also known as "estate di san Martino" (summer of St Martin) as these early November days tend to be quite mild - legend tells us that St Martin gave up his cloak to a poor man on a cold, rainy day and the weather suddenly became sunny and warm. In Venice, children dress up in the Saint's cloak and crown and go round the streets making 'music' with pots and pans in return for sweets. Traditional cakes are made in the shape of the saint on horseback. 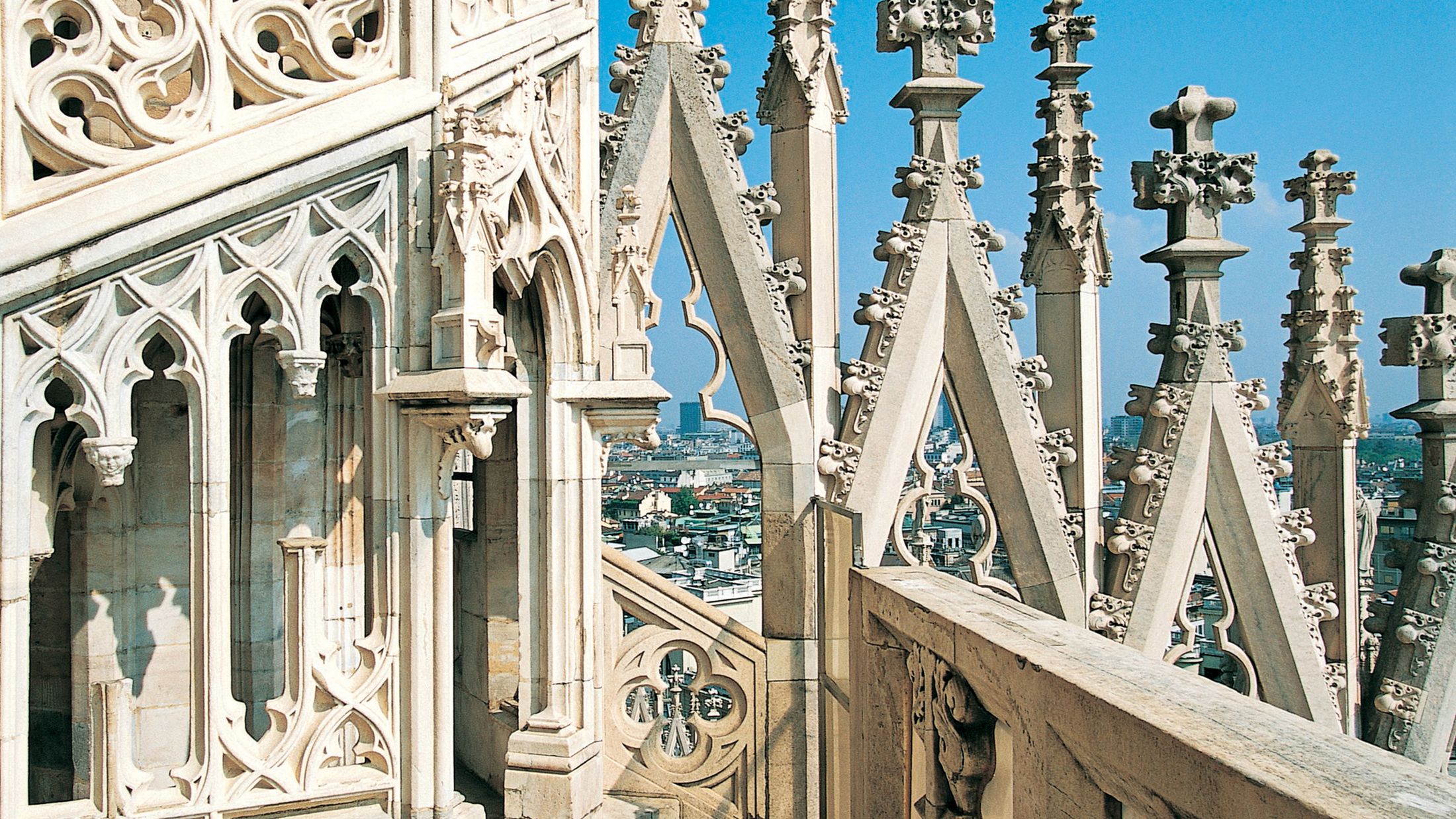 December - Oh Bej! Oh Bej! Christmas Market in Milan
Oh bej! Oh bej! in Milanese dialect meaning Beautiful! Beautiful! is the name given to this Christmas market which has been an annual event for over 500 years. Its origins began in the 1500's by Giannetto Castiglione sent by the Pope to convert the citizens. Knowing that he would not be well received, Giannetto distributed toys and sweet treats to children on 7th December the day of St Ambrogio, patron Saint of Milan. It was from this event that the concept of the market began and has, over the centuries, grown into the busy festive market it is today with nearly 500 stalls ranging from antiques and handicrafts to mouth-watering edible treats. Beginning on 7th December and lasting a few days, the market is situated at the Castello Sforzesco, not too far from the central Duomo area.